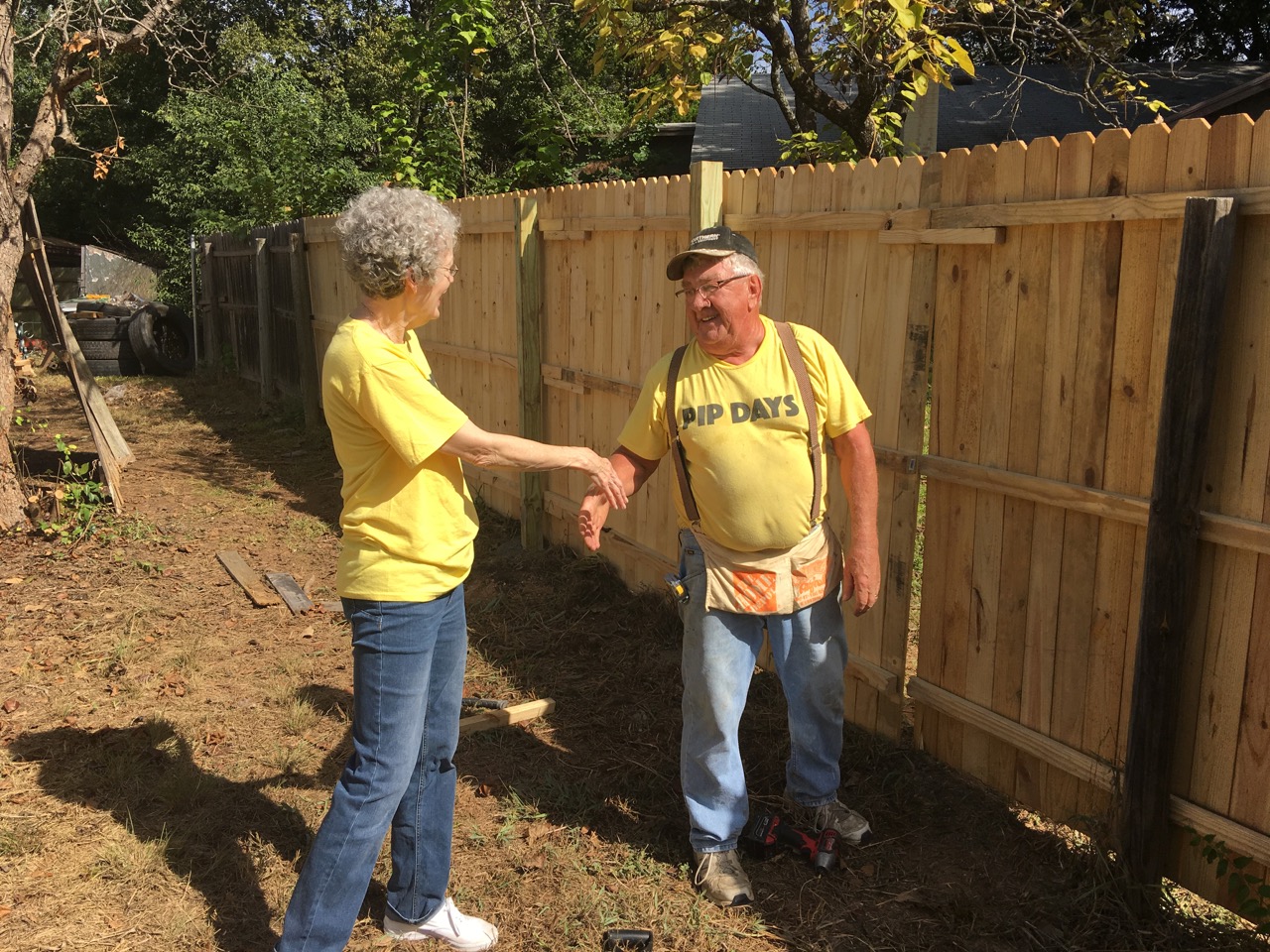 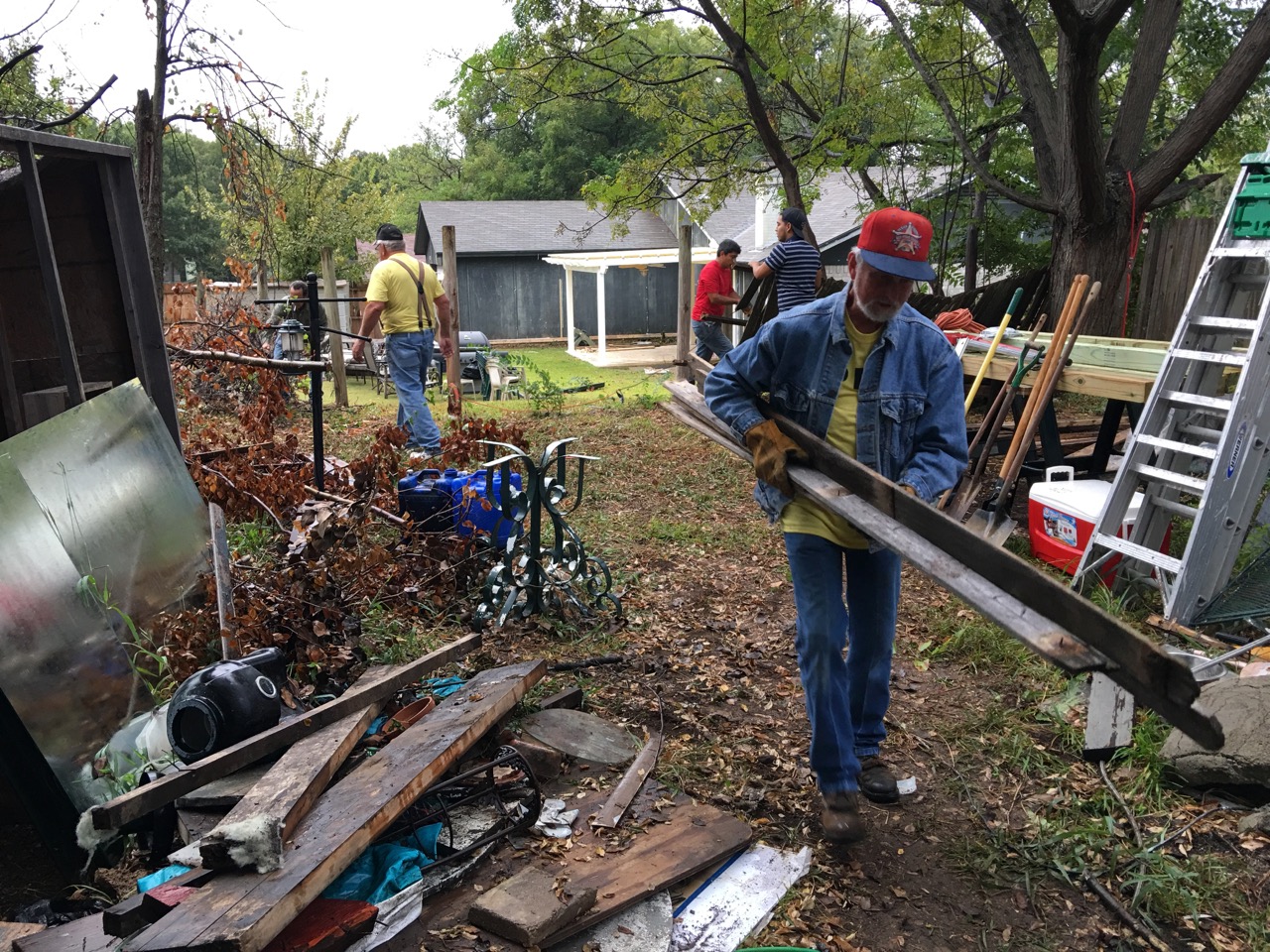 Our council was again invited to participate in a PIP Days project spearheaded by the First United Methodist Church in Duncanville on September 29-30, 2017. The project we undertook was a complete backyard fence replacement at 1622 Shannon Drive at the home of Fernando Gomez and family. PIP Days which stands for Property Improvement Projects is a community wide effort in conjunction with the City of Duncanville to help neighbors in need  keep up with city ordinance infractions so they can meet code to avoid fines. By making use of community resources from Holy Spirit Catholic Church’s Knights of Columbus Knight Hands and First United Methodist Church volunteers among others, the city of Duncanville is helping to facilitate a neighbors-helping-neighbors program that we can all feel proud to support. 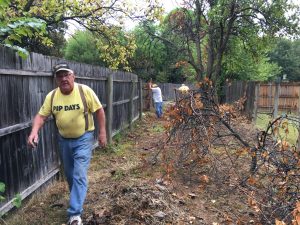 Led by Knight Hands Director Allen Reitmeier the project started at 8 am Friday morning despite the light rain falling throughout the day with a crew of Knights that included David Dybala, Ray Rivera, Jack Ramsden, Efrain Ochoa, Ken Rarick, Hector Rubio and Jorge Barragan. The Knights were joined by homeowner Fernando Gomez and his son, and the first task was to clear the backyard from accumulated trash, old truck tires and brush in order to get to the old fence to tear it down. After a couple of hours of hard work several new holes were dug and posts put in place with cement and left to dry overnight. Afterwards a few Knights headed to buy fence materials and supplies for the continuation of the job the next day.

The sun came back out and early on Saturday morning several dozen PIP Days volunteers gathered at the parking lot of the First United Methodist Church on Main Street where they were led in prayer by Senior Pastor Dr. Frank Alegria. The City was represented by City Councilman Steven Rutherford, Building Official Greg Contreras and Code Enforcement Officer Esther Wright. Besides the Knight Hands fence project there were two other home projects to which these volunteers would be assigned before going on their way for the day’s labor. 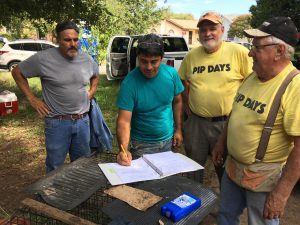 Having done all the preparatory work the day before including setting the new fence posts in concrete, the Knight Hands crew would complete putting up the new fence this morning at the Shannon Drive house before noon. They would have plenty of time to relax sitting on the bench under the old oak tree in the front lawn as they awaited complimentary lunch arrival from the local Sonic Burgers on Main St. brought to us by Code Enforcement Officer Esther Wright. The City had arranged to have the pile of trash and old fence materials picked up from the front lawn by mid morning on Saturday and they also had a porta-potty in place for the work crews both days.

It was a well orchestrated effort by all. As usual our Knight Hands Director Allen Reitmeier had everyone scheduled and assigned to their tasks, had purchased all the materials and supplies and had all the right tools available at the job site. PIP Days has now become a non-profit organization and as such is able to petition funds and accept donations from businesses and individuals that it now uses to help fund these and future projects. Everyone seems to benefit from these projects, and the ultimate beneficiaries, the families that receive the help could not be more grateful.

We thank the Knights who participated in this worthy project to help the family of Fernando Gomez at 1622 Shannon Dr. in Duncanville.